The story of a rebuild of a Grumman AA1B and installation of a Chevrolet 262 Cu.In. V6 engine.

The littlest Grumman, the AA1A, B and C, all known as the "Yankee" started life as a trainer and sport aircraft designed by Jim Bede with the sole prototype being manufactured in 1962.

Bede sold the design on to American Aviation Corporation of Cleveland, Ohio in 1968 who made modifications to better suit the target market, the flight training sector. That sector was booming in the 1970s and over 1770 Grummans including 4-seat AA5 variants were sold.

Well here we are at the end of another year - 2004 just flew by, while I put in as many hours on the Grumman as I could find.

Most of the work, but not all, has dealt with the engine installation - but also have completed a lot of work on the airframe and interior that was "sorta" done - but not completely completed - if you know what I mean!

First though it was time to get a suitable radiator made up - searched high and low for someone able to make up a rad to my spec in aluminium and finally after many weeks, found a company who claimed to be able to do this - always sceptical, I gave the job to them and kept my fingers crossed

After a number of delays, I finally got my radiator - it even looks good, with nice welds. Effectively it consists of a BMW 540 car radiator, split horizontally and placed back-to-back. A similar set up is used by many of the tow-truck cowboys in those hot V8 powered pick-ups we see prowling the roads for wrecks. Since the original engines in these vehicles was not a V8 but probably a puny 1600cc 4 cylinder lump, they also need extra cooling. I think my rad will work, with enough cooling air reaching it.

The radiator is mounted high up on the firewall and air is ducted directly to it from the cowl inlets - I simply bracketed the rad to the firewall using rubber exhaust spools to avoid vibration possibly cracking any welds.

With the engine and radiator finally mounted to the airframe, all ancillaries in place, and with oil in the engine, the time had arrived to fire-up the entire catastrophe.

No problem - fired up right away - and after timing adjustment and rough carb adjustment, it was sitting there idling tolerably well.

However it proved quite tricky to get the twin SU carbs set up to run cleanly from idle to higher rpm. With this set up, not designed for the Chev engine, and a manifold which had been heavily modified it's a real shot in the dark - is it the carb jetting that's the problem, or the inlet tract - or even the carbs themselves being too small? However perseverance pays - and with the help of a friend, Trevor who has wide experience in serious race car tuning and set-up, we now have a sweet running motor. A combination of carb and timing adjustment made simultaneously solved our problem - but as he pointed out, the stock Chev distributor has no provision for mechanical advance (all previously electronically controlled) and at high revs >4500 there is a slight misfire, which Trev puts down to insufficient spark advance. May need a different distributor to correct this.On the other hand maybe not, since with the PSRU gearing we will use the motor should never run more than 4400 rpm.

Two major crises cropped up during this phase - firstly, apparent low oil pressure, traced to a sticky gauge needle and secondly, a serious vibration through the entire aircraft when turning the engine between 1200 - 2000 rpm. At anything over 2000 rpm or so, the vibration was less - but only because it's frequency had increased and therefore made it less harsh!

I wondered what could be the cause, suspecting everything from the mount rubbers to my home-brewed tubular engine mount. Surely a V6 motor MUST run smoothly in an aircraft, more or less as in a car, even with the lower relative mass of the structure to which it is mounted?

To cut a week's investigations down to a short story - the culprit was the lack of an external balance weight on the flywheel. It seems that GM do not really balance their crankshafts, other than by welding a metal weight on to the flex-plate (which I had replaced with a Nissan 3.0 flywheel).

Obviously this solution is perhaps not the ideal - although if it works for Chev, why not for me? It would be nice to get the entire bottom-end of the motor (harmonic damper,crankshaft,flywheel) dynamically balanced as a unit, for perfect smoothness - but since that requires a strip down of the motor that will have to wait.

I have a theory - which has been proven time and time again with aircraft projects. It goes like this - on starting any major aircraft project, there are so many items to attend to and work through that you can look at any part of the aircraft and it's sub-assemblies and find plenty that needs doing. This situation carries on for a long time with a super-abundance of tasks - so many in fact, some large, some small that it is almost pointless to try and make any kind of detailed job-list, other than on a 'things to do today' basis!

Doggedly plodding on brings one to the point where, looking around the aircraft, more things are done than not done - you have to start thinking harder to identify what remains to be done, and a comprehensive and detailed list of the remaining items for attention can be tackled - it's at this time that one knows, with certainty that the end is nigh - if all else remains equal! The terms I use are relative of course - "the end being nigh" probably means that we can start thinking in mere years rather than decades at that stage!

Many major life-skills can be learned from the building/rebuilding of an aircraft.. Amongst these are- 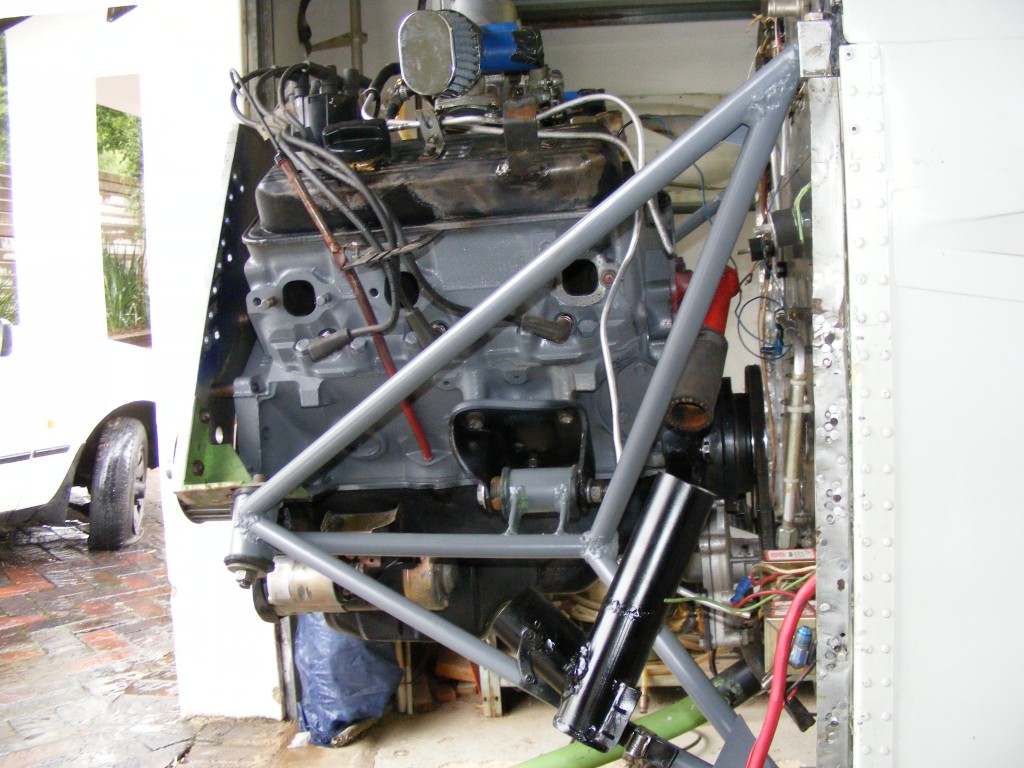 General view of Motor- Bare Chev 262 motor on trial mount made of mild steel tube and welded by yours truly - this mount will NEVER fly! 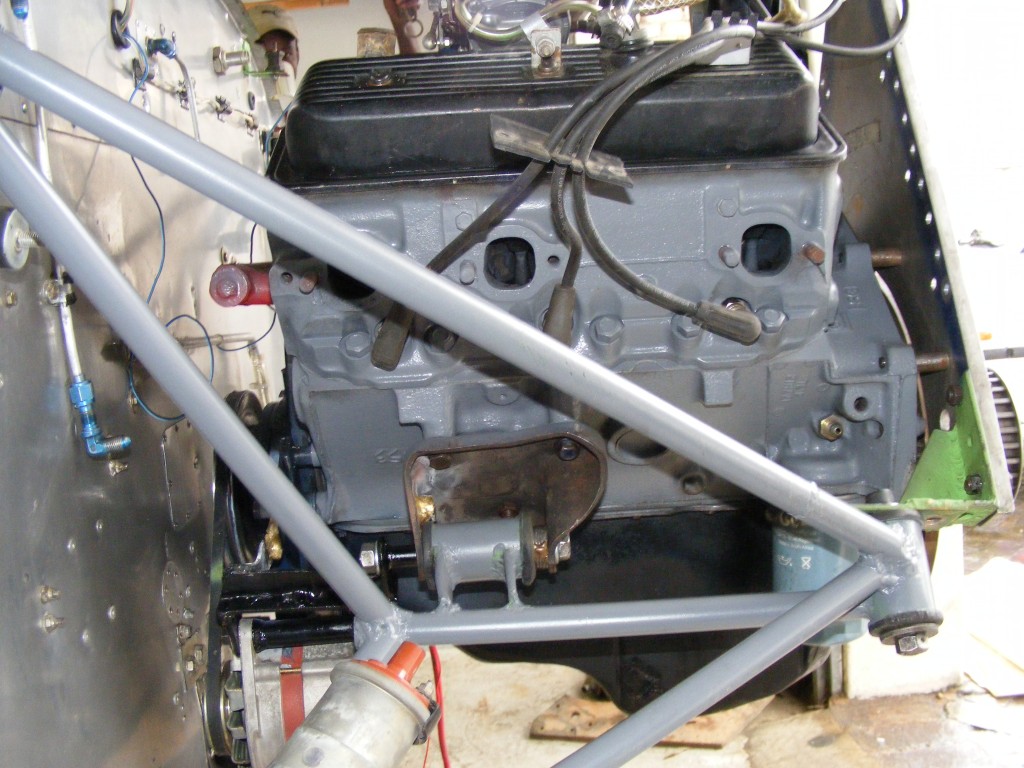 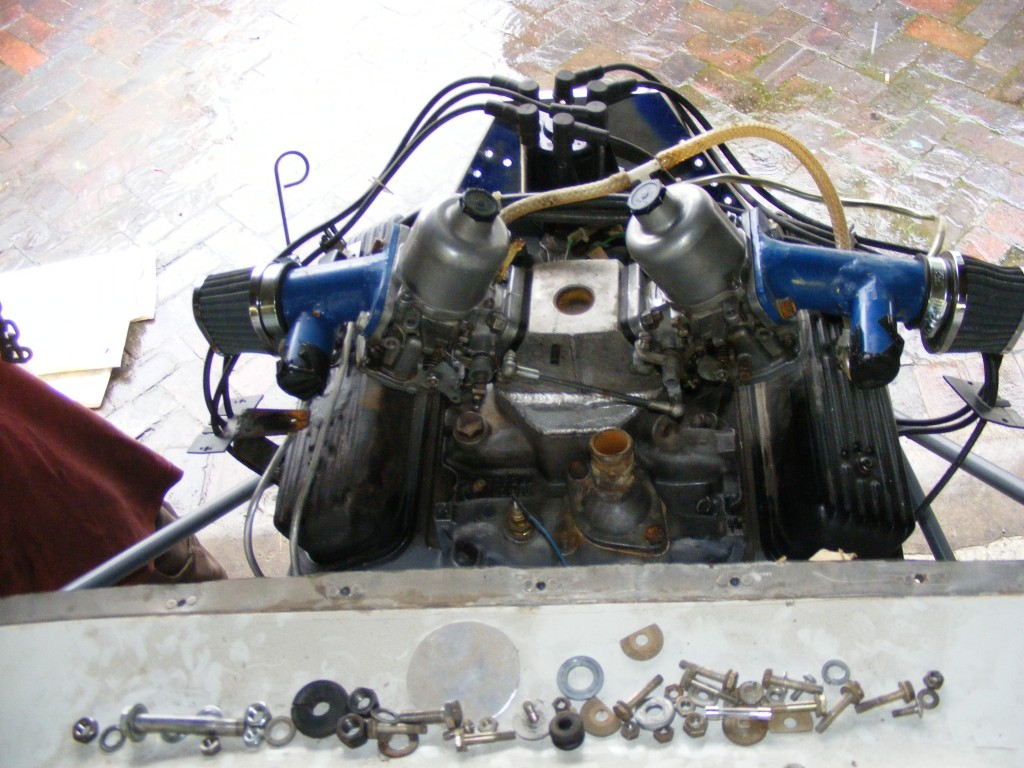 Top view - SU carb setup, may change to Holley or similar for lower height - but these work okay.